2022 cycling Perth wide is BOOMING as cyclists avoided public transport. Bicycle repairs and bicycle sales from bike shops in Perth have doubled during the Corona virus pandemic. With the coastal plain of Perth being so flat, cycling is an easy, cheap, enjoyable, all of the family recreational activity/thing to do in Perth. For the growing number of commuters in 2022, cycling is a fast, cheap, healthy alternative to traffic gridlock and car parking. Improved fitness is also a benefit of cycling which uses the biggest muscles in the body.

Cycling Perth's Swan River with Jon, my 9yo, inspired me to develop this Perth cycling website.  I grew up bicycling Perth's hill suburb of Darlington. Cycled for transport most days on Aitutaki for a decade but after coming back to Perth, I began bike riding up and down Perth's Sunset Coast because it was less boring than the knee rehabilitation gym after 3 operations.  The best bike thing was getting a bike rack for the back of my car.  We soon figured that bicycling around Perth's rivers and lakes is flat, interesting and easy.  I feel like a tourist in my home city of Perth. With the cold of winter making surfing Perth beaches less attractive, turning to bicycling has led to a discovery of how beautiful Perth waterways are.  Perth Cycling Map 700kb PDF.

Another good cycling thing in Perth is to register your bike's serial number in Crime Stopper's Bikelinc. It's good to help with lost or stolen bicycle recovery.

Bicycles on TransPerth buses are NOT permitted but are permitted on Perth trains except for peak hour exclusion times.
Trains travelling towards Perth between; 7:00am and 9:00am Monday to Friday.
Trains travelling away from Perth between; 4:30 pm and 6:30 pm Monday to Friday.
More TransPerth information about folding bicycles, unicycles etc. on Perth trains. When I was young, you could hang your bike on big hooks on the outside back of Perth buses. I'm guessing hooks were taken off buses because too many prams were left hanging with babies in!

We started bicycling near the Narrows Bridge, along the Esplanade of Perth's CBD, past the Causeway bridges, Windan Bridge, past Burswood, and along the South Perth foreshore.

A shortcut is cycling over the Matagarup Bridge which opened in 2018. It makes cycling to the new Perth Stadium easy.

After surfing at Scarborough Beach this morning we ate a packed lunch on the north bank of Swan River at Claremont. 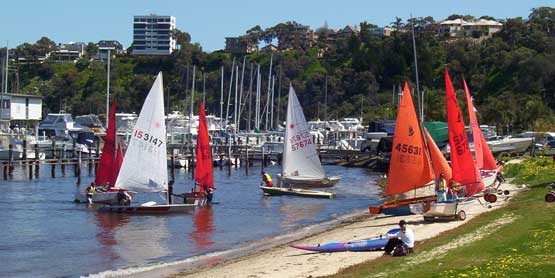 Most of Perth's bicycling along rivers is flat though this view at Mossman only a few kilometres from the Indian Ocean is worth bicycling up.

Cycling Fremantle streets was a very interesting cycling tour in this historic port city. More of our Fremantle cycling trip later. Perth bicycle routes away from busy streets from Fremantle to Perth were well sign posted. Cycling around Perth lakes such as Lake Joondalup and Herdsman Lake are flat and environmentally interesting. We consulted the Map of Perth, planned our trip with the regular strong sea breeze in mind. The boy with his 10 speed racing bike flew with the wind along the Melville foreshore south of Perth.

After bicycling over the Narrows Bridge we turned west into the sea breeze for our last leg.

Bicycling Perth's Herdsman's Lake and Lake Monger: If you're looking for a short bicycle riding tour in Perth, Lake Monger 5km north west of the Perth CBD is flat and takes about 15 minutes cycling. 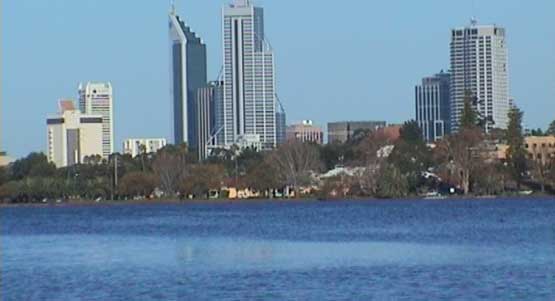 If you add nearby Herdsman's Lake to your cycling tour, add 40min.

Above photos on the Sunset Coast cycle path.

For us, living at the means frequent surfing and Perth cycling up the Sunset Coast to Hillary's Boat Harbour and south to Perth's City Beach.  Like most of Perth's bicycle paths, it is dual access but bicycle accidents do happen so watch out for children and dogs. Dogs (gods spelt backwards): please keep your careless owners a short leash.

Off Road Cycling Near Perth

Munda Biddi Trail, nature based. The longest off road cycling track from Perth to Nannup in the forests of south Western Australia

Not only is Perth bicycling fun and healthy but an environment and fuel and saver. Drinking water fountains are available while bicycling around Perth rivers but bring money just in case.  I find cycling through the much improved Perth bicycling paths is delivering empowerment to Jon and bringing back fond memories of cycling all over Perth in my youthful days. Cycling is also providing early practical road rules Perth training for cotton wool kids.

Cycling groups and cycling clubs in Perth can contact me for a free link from this cycling webpage to their cycling in Perth website.

I was cycling north along the shared pedestrian/cycle path at a safe speed with my kids following when I passed to the left (west) of a suit wearing pedestrian on the right (east) side of the path, near Mettams Pool.
When we got to the North Beach shopping centre my son was upset because as he told me the suited pedestrian:

I don't have an issue with pedestrians saying things if they think cyclists are going to fast.
The WA traffic act of 1974 states: Obstruction of vehicles and pedestrians:
(1) A person shall not, with intent to hinder or obstruct the passage of any vehicle or vehicles on a carriageway.

I was concerned about the safety of my children cycling to school. I believe that no one should deliberately move in front of an oncoming vehicle, be it a bicycle or whatever.
I also have experienced bad pedestrian behaviour since the City of Stirling (CoS) put up signs stating cyclists need to give way to pedestrians. A couple of months ago a pedestrian moved to the centre of the path and put their arm up when I was cycling past in the opposite direction, at a safe speed. What pisses me off is the one-sided approach by CoS. If CoS wants to erect signs motivating pedestrian aggression, how about signs telling pedestrians to behave like: 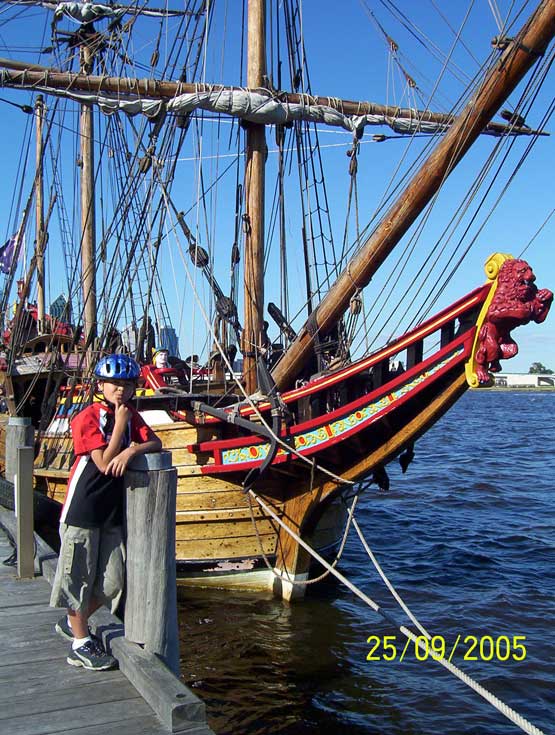 There were many interesting stops bicycling from Fremantle to Perth.

Sailing in the blood of my genetically Dutch / Polynesian son stopped us by the old Perth Swan Brewery where the 1606 tall sailing ship Duyfken was birthed.

Start your Swan Valley, (Perth wine region) bicycle riding trip at the information Centre in Guildford where you can get free bicycle touring information / maps.  There are some very bicycle unfriendly sections without the quality bike paths the rest of Perth have. 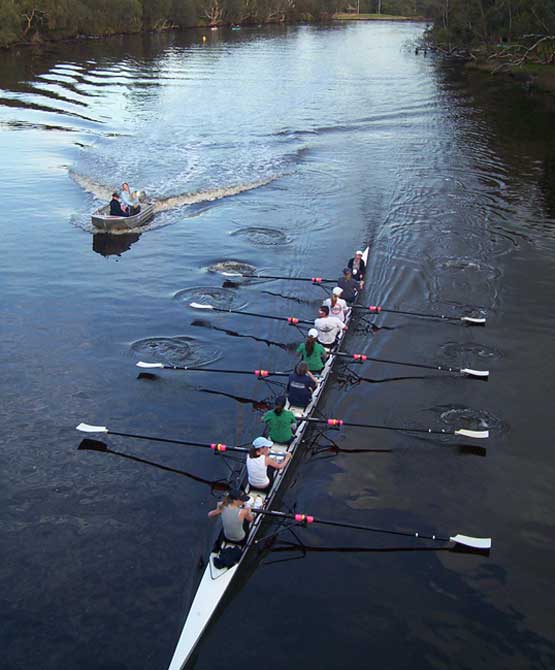