See my 2022 Youtube Video of Rottnest Island which includes Rottnest island accommodation and video of cute Quokkas near white sandy beaches on this little bit of Rotto paradise island near Perth Western Australia. It's similar to a paradise island where I worked in the hospitality industry for 10 years. 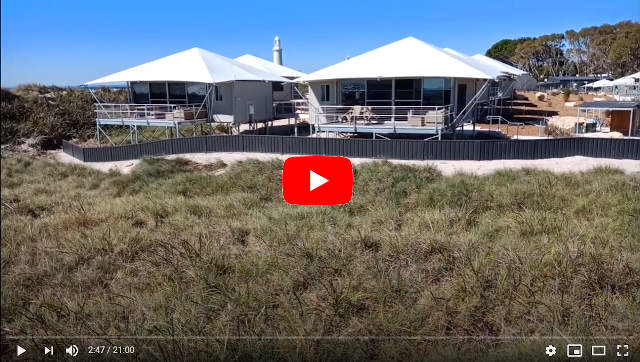 Alternative transport to Rottnest Island includes by charter boat, or plane, Jandakot Airport to Rottnest. Private transport is a great way of getting to Rottnest with a group of friends. Snorkelling equipment and lunch is included in this Rottest Island day trip. Plane flights from Perth to Rottnest is an option for people who get sea sick. From Rottnest to Perth are emergency plane flights. Private sailing yachts and charter boat are an alternative to the fast Rottnest Island passenger boats. I once sailed to Rottnest from the Royal Freshwater Bay Yacht Club with class mate Guy Hobbs (IM) grandson of general Hobbs (IM).

Pure white sand beaches at Rottnest are protected by from sun and wind by limestone rock outcrops. Beautiful bays of clear Indian Ocean teaming with fish. Beaches on the leward side of the Rottnest islet are the best so pay attention to wind direction and Rottnest Island weather reports. As a rule of thumb it's best to enjoy the best beaches of Rotto on the south/west side of Rottnest first thing in the morning. Then when the sea breeze blows hard in the afternoon, beaches like the Basin beach on the northern side of Rotto are good and seltered from the south westerly sea breeze. 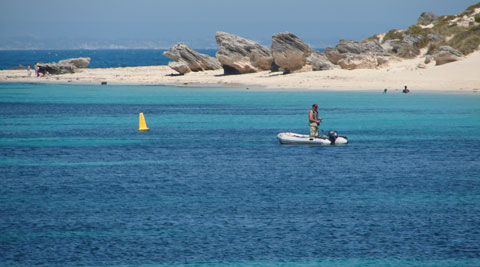 Photo right is one of my client's hired cranes from Perth being used in the development of improved infrastructure on Rottnest Island.

The Rottnest climate is warmer than Perth in winter because it's out in the Leeuwin Current and because being a low island, rain doesn't form up but rather passes over the island. 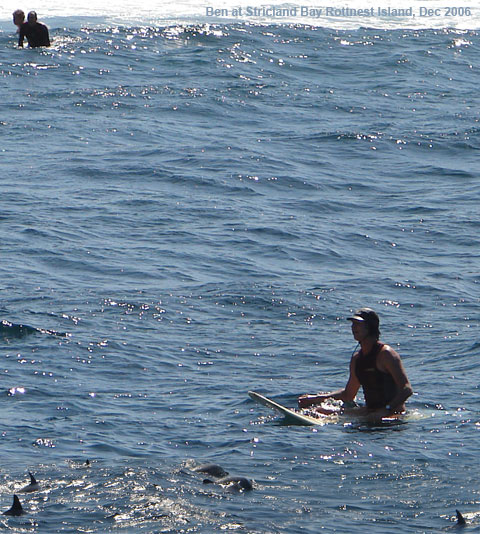 Surf at Rottnest Island is about 4 times bigger than surf  at  Perth Beaches. Surfing at Strickland Bay this morning inspired me to put this webpage about "Rottnest Island" together. I'm used to surfing a beach break at Scarborough Beach. The last reef break I surfed was at Hikkaduwa in 1976 so there was some fear which dissipated with the first wonderful ride. I didn't know when to stop and went almost to the beach. When I got off the wave I was standing on the seaweed covered limestone reef. The surf rolls in at Rottnest Island from the Indian Ocean, giving PLENTY of time to get surfing. Even if you wipe out, there's plenty of water between surfers and the reef. Fishing charter boats do fishing and surfing tours to Rottnest Island surf spots out of Hillarys Boat or from the port city of Fremantle. Photo of me surfing with a pod of surfing dolphins at Rottnest Island.

Kitesurfing and windsurfing at Rottnest Island are also popular.

ROTTO THE ISLAND OF LOVE

I had my first "pash" at Rottnest with an exciting, young beautiful Perth girl "Loverock" older than me circa 1967 in a tent at the Rottnest Island camping ground known as "Ten Land". There are many bungalows but because Rottnest accommodation is very popular you need to book MANY months in advance if you want accommodation at Rottnest in peak summer season.

THINGS TO DO ROTTNEST ISLAND

Rottnest island camping tents have been left open for courtship resons but if you fell asleep, quokkas, Rottnest's little furry creatures which look like big rats, would get in to eat your food. Rottnest Island quokkas are the reason early Dutch sailors gave the island the name (rat) Rott-nest. 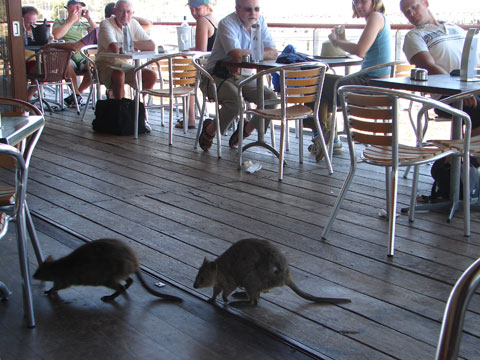 There are food stores and restaurants at Rottnest. The Rottnest Island bakery is worth waiting for breakfast.

Our favourite transport on Rottnest Island is by bicycle or kayak.

A hop on hop off bus service circles Rottnest Island. A small train service is a vailable too.

The small number of service vehicles on Rottnest have a slow 8km/hr speed limit.